We are a Swedish technology company embedded into an innovation eco-system poised to create next generation global solutions to sustainability challenges, with offices and design centers in Stockholm, Gothenburg and Norrköping. Our R&D and production facility is a converted 780 MW power plant outside Norrköping. The production facility benefits from a 130kV substation connected to the national grid, an integrated deep-sea port and water-rights enabling large scale cooling.

The world is facing an unparalleled growth in needs and desires for computing power across areas as pattern recognition, image analysis, transaction validation, artificial intelligence, deep learning and much more. High Performance Computing (HPC) is already affecting many aspects of life, some examples being healthcare, mobility, communication networks, financial services, industrial processes and scientific progress. Central to Synthesis Analytics green HPC is running advanced algorithms as efficiently as it possibly can be achieved, using renewable resources. For efficiency reasons, both hardware and software have been designed specifically for the task. To enhance efficiency of the processes even further, recycling of the energy used for the computations can be achieved with a technology called immersion cooling. This is a recent innovation, allowing for capture and reuse of the energy coming from the HPC centres in full.

Through renewable resources computations can be done in a carbon neutral way and by offsetting for example coal powered heating of homes and industries with heating from HPC the end result can actually be a net positive with regards to carbon emissions. In essence, the HPC centres aid society in transcending from dependency on non-renewable power sources. Synthesis Analytics green technologies and their relevance to the listed Green Bond has given rise to positive external validation by Sustainalytics, Europe’s leading green technology validation company. Their accreditation can be found in a Second Party Opinion given for Synthesis Analytics Green Bond Framework based on the green bond principles set out by ICMA.

Edge computing means, in essence, to bring a computational task closer to the place where it is required. It has a number of benefits as compared to the traditional centralised approach and there are many scenarios where edge computing holds an advantage with among other benefits its’ shorter response times, reduced latency and lesser resource requirements.

According to Gartner, in 2025, 75 percent of all enterprise data will be created and processed outside a traditional centralised data centre, HPC centre or cloud. In other words, at the edge. Comparing to the 10 percent of today this is obviously a big shift that the computing industry is going through.

Recent growth in edge computing has been driven, to a significant degree, by streaming video services such as Netflix and YouTube. According to bandwidth management company Sandvine, during peak evening hours when networks are under the most stress, Netflix can account for 40 percent of all internet traffic in the US. New cloud gaming services such as the recently launched Google Stadia will undoubtedly add significantly to this load and there are many other drivers for edge computing that are increasingly becoming mainstream realities, such as the Internet of Things, autonomous vehicles and the many and varied applications that will be enabled by the fast response time and high bandwidth of new 5G wireless networks.

Synthesis Analytics have developed several specialised solutions to meet these context dependent edge computing needs. The Edge1 solution integrates directly with city district heating and replaces traditional fuel burning to generate heat, while at the same time bringing the point of computation directly into the center of a city. The Edge2 solution brings the computing power right to the point of consumption and can at the same time directly heat a hospital, an industry or a city block, without any requirements to integrate with remote district heating but can instead directly generate the required heating on-site.

Heating and cooling in buildings and industry accounts for about half of the EU’s energy consumption, and 84% of heating and cooling is still generated from fossil fuels while only 16% is generated from renewable energy. Heating and hot water alone account for 79% of total energy use in EU households, whereas EU industries use about 70.6% of energy for space and industrial process heating1. Synthesis Analytics EDGE1 and EDGE2 solutions represents a unique and timely opportunity to re-invent the current heating architecture and support phasing out the use of fossil energy sources in the European district heating. By replacing fossil fuel sources for heating with EDGE1 and EDGE2 solutions, Smart Cities can be built based on Intelligent Heating with high performance computing capacity placed where it is most needed.

EDGE 1 is designed as a modular solution to integrate into existing district heating systems. It is designed to be easily deployed and managed in old centrally placed coal or oil power stations formerly used to heat the water for the district heating. EDGE1 comes powered with the most modern and energy efficient processors for selected high-performance solutions and ready to replace fossil energy sources.

EDGE2 is developed to further strengthen the capacity to meet high-performance computing needs of the future and at the same time further accelerate the implementation of the 4th generation of district heating (4GDH) based on smart heating networks to ensure the development of sustainable energy systems. By creating a series of "heat generating hubs" through EDGE2 large-scale edge deployment, the base-load temperature on the water coming from the district heating source can be reduced, thus lowering the energy demand of the current district heating at the source. This solution further contributes to reduce the energy loss over the distribution system and increases the heating power share supplied by renewable sources.

Synthesis Analytics has defined Security as one of the key pillars for its operation. The Nordics is as a starting point recognised by Forbes in November 2019 as being the safest place in the world. Synthesis Analytics development and production site is located at a perimeter fenced site with 24/7 security. The walls into core facilities are over one meter thick solid reinforced concrete and the basements go deep underground as far as 60m. The security system encompasses Iris retina recognition, biometric identification and airlock zones for entry. The Synthesis Analytics computing units have been upgraded with a custom security system with a two-stage digital and physical access system. All of the Synthesis Analytics HPC locations are designed with monitored CCTV systems and with a single way in and out architecture.

Why Sweden and the Nordics for HPC

The Sweden and the Nordics has a number of characteristics that makes it uniquely well suited for HPC centers. Generally, the combination of a high degree of renewable energy, several densely populated areas, high demand for heating most of the year around and a very well built out district heating infrastructure makes it an almost perfect fit for the solutions that Synthesis Analytics are providing. There are many other reasons for why the Nordics are such a good fit and a sample of them can be found here below.

The financing of our next stage of growth and development is via the issuance of a listed green bond. The bond is a a listed financial instrument on both the Frankfurt and Dublin stock exchanges. The bond is issued through Sustainable Capital Plc. The bond is currently trading in both GBP and USD with the following ISIN numbers: 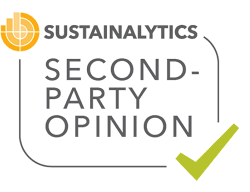 Enter your email address below to download the Sustainalytics Report.

The following is just a small selection of the partners and customers we work with and supply each other for our valuable services:

Become a Partner, Supplier or Customer

If you would like to join us on the journey as partner or supplier and are convinced you can contribute to the development of Green Computing™ and Intelligent Heating we would love to hear from you. We are proud of our technology and solutions but humble with the need for further developments in close collaboration with partners, suppliers and customers. We are dedicated to perfection and always strive to push the boundaries of technological advancement, if you are the same, please get in touch with us here here.

If you are a user of high performance computing power and you care for the environment and also care for the cost of your computing then please get in touch with us here and let us arrange a consultation to see how we can optimise your computing tasks with our infrastructure and help you perform your HPC needs in a cost effective and green way.

At Synthesis Analytics we have formed a connected whole, from various components to bring the systematic computational analysis of data and other information, via a high performance computing solution in a modern and sustainable approach.